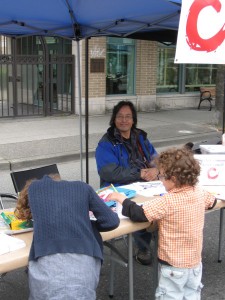 Burton Amos is an artist.

He joined the board in November of 2010 and has been active on the Activities Committee. The board recently appointed Burton as our Aboriginal Community Liaison and he is also a member-at-large on the CACV board.

For the Aboriginal Day at Oppenheimer Park, Burton created an original drawing of an eagle for kids to colour. He’s offered to create a new drawing next year. The sheets were available at Car Free Days and we recently had a visitor (with her mom) to the office, who was delighted to work away and leave her page as a gift to us.

People at our AGM were moved and inspired by Yulanda Faris’ keynote speech on the Importance of Community Arts.

it is essential, to a community, to support
the artist among us and the artist within us
to build a civil and well-functioning society.

My father was a Story-Teller. He used to regale us, his children, with his stories, usually at supper time,often to our amusement for some of these stories were many times repeated. It was only later I realized that my Father, who was functionally illiterate, came from a tradition of “oral learning” and that he learned the history and folklore of his people, in his small village in Lebanon, from nomadic story-tellers and wandering minstrels. The town square was their theatre and meeting place for the community.

Modern day artists, our story-tellers and minstrels, perform in theatres, halls and community centres. Their work is important to a community not only in telling our stories but they are also the agents for change. They help to develop our imagination, our communication skills, our empathy and our understanding of ourselves as human beings. To cite but one example, Kevin Loring’s award winning play, “Where the Blood MIxes”, taught me more about the soul
destroying experience of the Residential School system than any report I have ever read. The play also spoke of hope and redemption and the exorcising of the evils that beset us.

“The Arts” is the great equalizer; no matter your station in life, everyone needs some aspect of the arts to grow and develop as a contributing member of society. “The Arts” is not some commodity locked away in a closet somewhere to be opened and utilized when needed. Art and Culture are integral to who we are as human beings. Money is not the great definer of who we are as a people. We need to learn what is essential to “being” and the sick in our society

are those who are void of empathy, of self-esteem and the inability to envision how “better” can be attained. My father, the story-teller, taught me the importance of a curious mind; the desire to always be learning, to delve into the many ways we can learn and to find the tools with which to learn. Arts and art practices offer this to us and it is essential, to a community, to support the artist among us and the artist within us to build a civil and well-functioning society.

I am not suggesting that the Arts is the panacea of all ills……. we need trade and commerce, we need medical care education etc……. but the Arts help us to define ourselves. Without imagination, we cannot dream, without the dream, there is no hope and, as the Good Book tells us, while there is hope, there is life.

Beth Carruthers is known internationally for her work in arts, sustainability and community engagement. Over more than a decade she has earned a reputation for building collaborative relationships among artists, their communities, the sciences, business and academia, creating innovative programming which engages families, communities, artists and students. Beth holds a BFA and an MA in Values and Environment. In 1997 she co-founded, and through 2002 programmed and co-directed, the first Canadian arts-science collaborative organization addressing habitat and sustainability in urban centres – with a focus on the Vancouver region.

She is now the newest member of the CACV Environmental Arts Advisory Committee. Below is a piece written by Beth exploring the connections between art, the environment, and action.

In the words of early U.S. conservationist Aldo Leopold, “We can be ethical in relation only with that which we can see, feel, understand, love, or otherwise have faith in.”  (The Land Ethic)

Cultural values and the role of the social in climate change, land use practices and sustainability has been generally overlooked or underplayed. Yet it is people, human communities, whose choices are based upon their understandings of what the human-world relationship is, which ultimately decide the kind of world we and our children will have. Eco-art praxis, as a kind of realised ethical vision and collaboration, embodies and reveals alternative ways of acting within human/world relations. The ethical engagement or awareness embodied in, and/or revealed by these works and practices, opens a space for a recognition and reinterpretation of human/world relations. These works, and our interactions with them, can be both revelatory and transformational.

Through connecting people with the greater ecological community of their environing world, and by revealing, or foregrounding these ecological relationships in ways that are emotional, embodied, and both intellectually and materially pragmatic, the artists and works engaged with land, community and sustainability aim to encourage a more caring and responsible role for people within that community.

An essential aspect of this process is aesthetic engagement (and I am also drawing here on the etymology of the word, which is “to perceive with the senses”). We are engaged by and in the work by way of our senses – by way of our embodied being in the world. This can provide a revelatory experience, from which can arise new understandings – and we may be forever altered.

To paraphrase UK curator Wallace Heim, “these works are often resolutely between conventional forms”. Yet from from Land Art to Social Sculpture, they share common ethical territory and intention.  To quote Suzi Gablik, artist, critic and theorist:

“If you are going to challenge the old Cartesian dualisms – like the one that separates art from life – with more participatory and engaged forms of consciousness, then you will also need a whole new language; one that expresses interdependence and reciprocity, so that the creative imagination can meet its new task. Changing paradigms is more than just a conceptual challenge…” (ecoventions)

Even in this day some eyebrows still rise, or concerns appear at the idea of art being pragmatic, functional and useful. I counter by saying that art is always active in the world. Art does something, it is not passive. Were that the case, it would not have been burned, banned and forbidden by dictators throughout history. While we always need the voice of art and artists, we need it now more than ever. This is critical, engaged and passionate praxis at a time of global ecocrisis.

We’re pleased to announce that Stephen Lytton will open the program on Thursday, November 25, by acknowledging First Nations land and speaking about the impact involvement in community arts has had on his own life.

Stephen Lytton is on the Board of Directors of the BC Aboriginal Network on Disability Society. The following biography is an excerpt from their website.

Stephen Lytton was born in Lytton, BC in 1955. He was born affected with cerebral palsy that has affected his mobility from the waist down. The condition led to many developmental delays due to limited access to service out of Lytton. Stephen experienced a great deal of corrective surgery and lengthy hospital stays throughout his childhood. He walked assisted by leg braces from the waist down or at times he used crutches. The last surgery was in 1970.

Stephen attended St. George’s Residential School and participated in many organized activities although he missed regular family life and the companionship of his younger sisters. As an adult, Stephen looks back on his schooling with some regret at missing opportunities to learn more about the Nlha’7kapmx people.

It is Stephen’s goal partly through his education and participation with the Board to ensure that disabled Aboriginal people have greater opportunities for personal development. He would like all disabled Aboriginal people to play an active role in community planning and decision making to promote opportunities and understanding of issues of disability and well-being.

Stephen’s aspirations were captured in this quote: “I feel that every disabled person, Aboriginal or other must be involved in the community. This involvement not only benefits the individual, but also strengthens and promotes the health of each community. Involvement in government policies an decisions that affect our communities and that of the country in general will, I know make way for a much more productive and hopeful future for all Aboriginal people, and perhaps all people.”

The Snowy Owl Traditional Singers will be performing outside of Chapel Arts, 304 Dunlevy Avenue, from 6-7pm at the Community Arts Council of Vancouver’s AGM on Thursday, November 25th. Come out to this free performance brought to you by Creative Pathways, a CACV initiative, and the BC Arts Council as part of the Artists in the Street project. For more information please contact Sita Kumar, Creative Pathways Program Coordinator, at sita@cacv.ca or at 604-600-7227.

Savannah Walling of Vancouver Moving Theatre will join Chris Tyrell and Hank Bull as First Responders at AGM, after the keynote on The Importance of the Community Arts. After all four speakers, we’ll open it up to the audience to share how the community arts have impacted you and your life.

Here’s some information about Savannah from Cultural Services, City of Vancouver, website when she and Terry Hunter were awarded the Cultural Harmony award.

Savannah Walling, a theatre artist and writer trained in dance, mime and music, is the artistic director of Vancouver Moving Theatre, a professional company she co-founded in 1983 and with which she has toured four continents and created over forty interdisciplinary productions.
Ms. Walling collaborates with artists of many genres and traditions to create interdisciplinary repertoire influenced by Vancouver’s Pacific Rim culture and her own inner city neighbourhood, the Downtown Eastside, where she has co-written, collaborated on and overseen the artistic development of many cultural development projects. Ms Walling writes articles and presents lectures on VMT’s interdisciplinary and community engaged practice at conferences and educational institutions throughout Canada and the US.
She was co-awarded a Jessie Richardson Award for Significant Artistic Achievement in Spectacle Design and received the 2008 British Columbia Community Achievement Award.