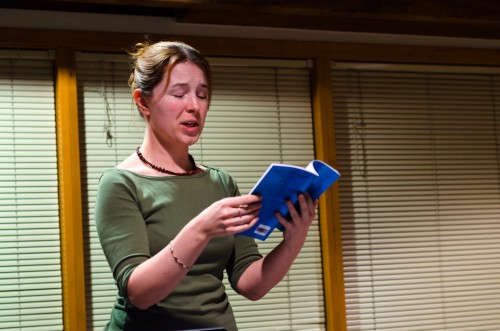 February’s Eco-Arts Salon featured local playwright, Jordan Hall, in an intimate setting where participants enjoyed an evening of dramatic storytelling. As our first Eco-Arts playwright presenter, Jordan gave some unique insight into the crossover between storytelling and environmental and political activism. 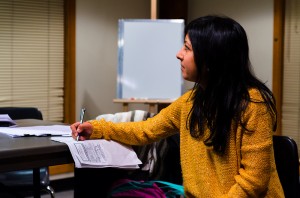 The salon began with a reading from the play Kayak, where the author read in the voices and manners of her play’s three characters: Annie (56)- a suburban right-wing housewife, her son Peter who is entering University and is in the process of finding himself, and Julie– Peter’s new environmentally-minded girlfriend. Jordan Hall’s voice and inflection changed, as did the direction she faced, when each character took his or her turn. We, the audience, sat in a semi-circle around the artist as she performed.

Annie: “People have habits and comforts…you can’t just force them by making them feel guilty”

Julie: “Pete’s taking an interest in his ethical existence.”

There were many questions that followed, in relation to Jordan’s practice as a writer, in the national performances of her work by actors on the stage, and her feelings about these. One of the larger questions that would be workshopped in the second half of the salon pertained to the engagement of the audience with Jordan Hall’s underlying concern in the play (and our interest in Eco-Arts): how to increase their level of concern and action on behalf of the environment. We wanted to know how to share and overcome our feelings of helplessness and powerlessness in the face of environmental devastation, and as Jordan put it, “create a political play and a sophisticated piece of writing”. 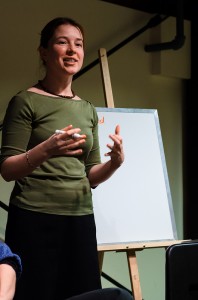 In Jordan’s words, theater does not aim for the obvious but hopes to “give the building blocks of experience. It’s not ‘what’s 4?’, but ‘what’s 2 + 2?'”. As a group we were given a recent article from the Tyee about a particular case of a small landowner and her battle against the fracking that is occurring on her land. The woman’s trails against the government and the energy corp were complex, and it was our task as a group to determine how to dramatize the story in a way would speak to a large audience… and in some manner cause them to care.  Jordan gave us some dramaturgical tools that would help us create a story that respected this complexity, where characters on either side of the story might have believable arguments. We also discussed the opportunity for using elements of the story as metaphor and popular culture references as key elements in roping in our potential audience.

But who is our audience? This was the tricky part. Our brainstorm had us identifying who we wanted our story to speak to, and this is something that many of us took away from the salon and will integrate into our various artistic practices. It is not enough to write or paint or act out a story: we need to remember the whys and the whos to really give our actions purpose. 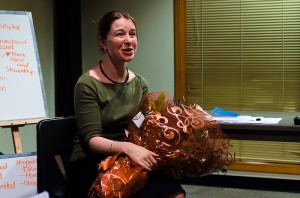 Thank you to Jordan Hall for a lovely evening and presentation, to our partners at the Roundhouse for their continued support and provision of space for the events, and to Divine Designs Ltd. for their donation of a heavenly smelling bouquet for our presenter. These salons are made by audience participation- if you are new to the events, pass them on!

Stay tuned for our March Salon with Painter Todd Polich! Our events are free with a CACV membership.