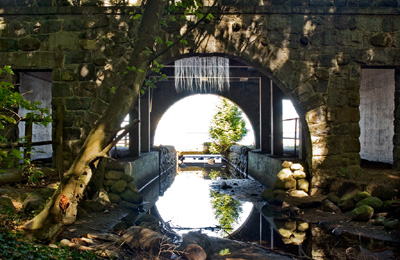 A series of environmental works of art have sprouted among wreckage of the 2006 windstorm that knocked down thousands of trees in Vancouver’s Stanley Park.

The works — some of which are on display in prominent places, like the old polar bear exhibit near the Aquarium, or along secluded trails — are part of the first (temporary) phase of the Stanley Park Environmental Art Project.

Each of the installations, which can be viewed with a self-guided map downloaded at vancouver.ca/spea, is designed to last for a couple of months, up to two years.

Tania Willard, a Sec­wepemc (Shuswap) artist, said she was drawn to the project because it used only natural materials and was done in consultation with ecologists.

“It felt like a holistic approach to an art project in the Park,” said Willard, whose work, Birth, is an exposed hemlock root system on the Cathedral Trail near the Lost Lagoon.

T’Uy’Tanat Cease Wyss, with Italian-born sculptor Davide Pan, planted West Coast species on a red cedar stump. The plants’ names were carved into the stump in Squamish and English.

“The inspiration is about putting a more visible face to that land with an invisible handshake between indigenous and non-indigenous species,” Wyss said.

Other projects included Hibernators and Fringe by Shirley Wiebe and Cedar by John Hemsworth and Peter von Tiesenhausen.

The works are a lead-up to a number of semi-permanent installations (lasting between two and five years) next summer.