In September 2013, I started working as the coordinator of the Community Arts Fund Program with the Community Arts Council of Vancouver. Since 2011, a community jury has awarded annual project grants of up to $5000 to Downtown Eastside organizations working collaboratively with an artist. Since then, I’ve had the pleasure of overseeing 4 cycles of funding partnerships with diverse organizations/artists working in everything from housing to hip-hop. These Community Arts Fund (CAF) projects have ranged widely in genre and scope, but they all share a common intent of “community-led renewal” through artistic creation and civic engagement. They have all in their own way prioritized the abilities, histories, and visions of the people of the Downtown Eastside. And they have produced valuable insights into the practice of community arts. This year, my colleague Chris Gilpin and I, with the support of our Board and our DTES Community Arts Advisory Committee, decided it was time to celebrate the work that has been accomplished by bringing all the completed projects together in one room for a day of knowledge exchange. It was important to us to facilitate an informal and grassroots setting that would allow different ways of knowing to come forward – such as artistic, relational, and experiential knowledge – rather than an overly formal or academic setting that might stifle these approaches. We wanted to build community, not only talk about it. The idea for a pilot Community Arts Unconference, scheduled for June 3, 2016, began to take shape. 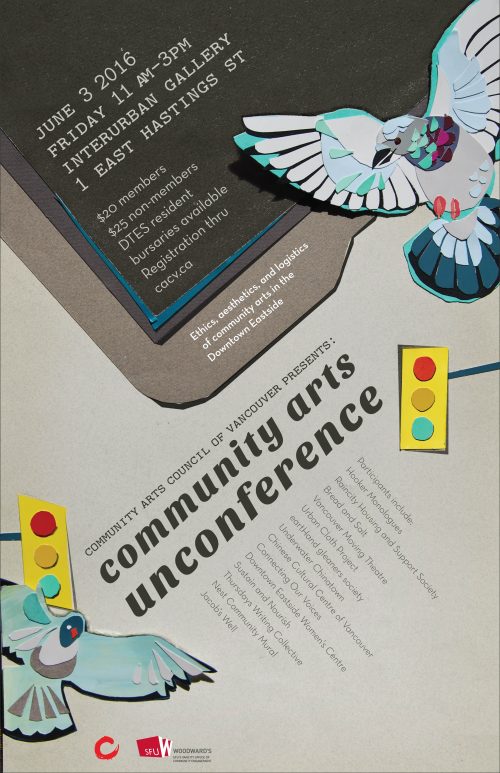 After months of planning, and a beautiful poster design by graphic artist Tiare Jung, the day finally arrived. SFU’s Vancity Office of Community Engagement had generously secured us the Interurban Gallery, a cultural hub of the neighbourhood. At the last moment, we discovered that the Vancouver Foundation’s annual Downtown Eastside Small Arts Grants Group Show, composed of works by local artists, would be opening in the gallery that evening. Rather than consider it an obstacle, we worked in collaboration with the exhibition team to hang a button blanket created by one of the CAF projects, and then had the pleasure of hosting the event surrounded by gorgeous artworks! 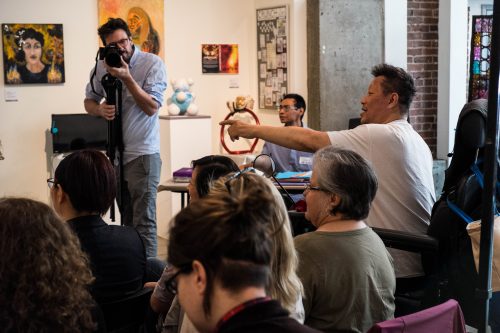 As our 35 or so participants arrived, I was overwhelmed by how energizing it was to have all these people in a room at once. We had asked projects to assemble teams of up to three people, ideally including an artist, a project leader from the host organization, and a community participant. Most of the folks there I had met in person, but some I was meeting for the first time, having only communicated via email up to that point. Going from being on the other end of a computer to being face-to-face, I realized how important it is to find opportunities to come together, especially in a field that foregrounds relationships. There were also a few practitioners from outside the neighbourhood who registered for the Unconference seeking to learn from our context. It was exciting to see the mix of people in the room interacting with each other. 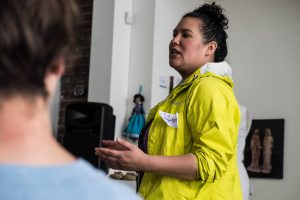 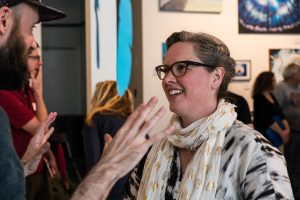 After a welcome to Coast Salish territory from one of our participants, Chrystal Sparrow, we witnessed our first “pop-up performance” by actor and poet Muriel Marjorie, who presented a Shakespearean style monologue from the 2014 production “Much Ado About Something”, created with Raincity Housing for Vancouver’s Homelessness Action Week. Muriel’s empassioned delivery got our blood moving for our next work of the day, which was to hear 5 minute introductory presentations from each of the project teams. We heard from mural painters, theatre artists, script writers, musical directors, Ukrainian dancers, project administrators, and chapbook publishers about the unique challenges and opportunities presented by their projects. Teams presented their work with enthusiasm and expertise, and the rest of the audience listened with the genuine interest of those who are deeply into the work themselves. There was a sense in the room of witnessing each other as we made ourselves visible. Some of the projects had received substantial media attention while others had not. It became clear how important it was to provide the space for each group to discuss the gems of understanding that had emerged from their projects. 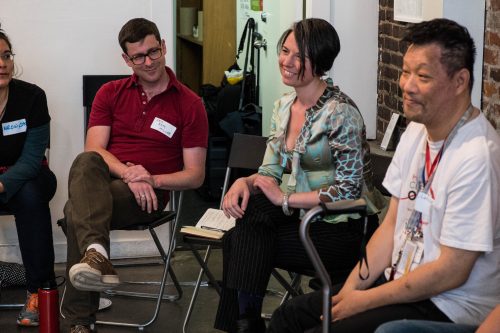 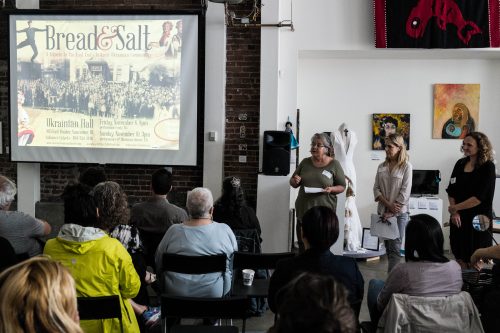 We asked participants to hold their questions and comments in response to these short presentations and save them for a community art response facilitated by Cree artist Steve Cardinal. I had invited Steve to create live art in response to what was taking place in the room, and he took it far beyond what we had imagined. Using the Unconference as an opportunity to innovate a long-held idea, he created a structure from the frame of a large outdoor tent and suspended a dream catcher made of branches and wool. He called it the Dream Hatcher, describing it as a “micro-ceremony” designed to activate and project the prayers of anyone who walked under it. It was set up so that as participants arrived, they passed through the structure. This generated, in the words of one participant, a sense of “sacred geometry”. Steve gave a moving speech describing his journey of coming to the Dream Hatcher idea and invited us all to write down our questions, prayers, and dreams on paper feathers which were then suspended from the structure. As one participant said, Steve’s “invitation to bring our visions and dreams into the Dream Hatcher…created a collective space to witness and hold the beginning of many dreams taking flight!” Without a doubt, the Dream Hatcher was a highlight of the day, bringing a sense of reverence and vitality and making the Unconference itself a work of community art. 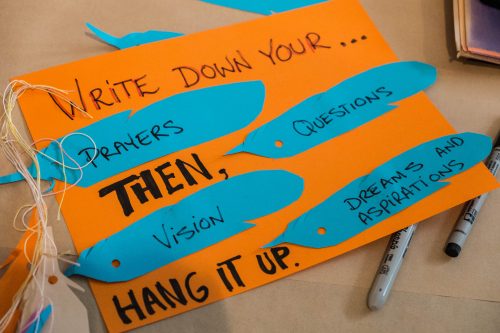 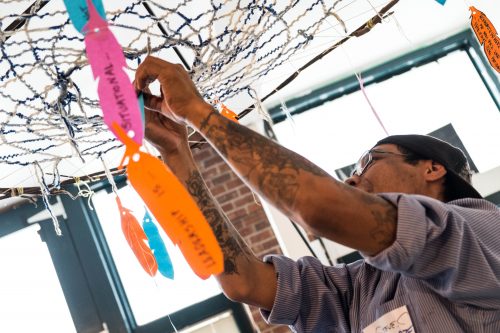 After a beautifully presented lunch of sandwiches by local social enterprise Rainier Rations, we transitioned into a circle format for our second “pop-up performance” from Ukrainian artists Beverly Dobrinsky, Deb Karras, and Laurel Lawry from the 2013 musical theatre production “Bread and Salt”, produced by Vancouver Moving Theatre in collaboration with the Association of United Ukrainian Canadians. Showcasing small moments of actual performance from the projects enlivened the group and got us ready to continue with the dialogue. Our “Unpanel” involved a microphone traveling around the room with each project team answered the question, “What would you tell someone embarking on a community-engaged arts project that you wish you’d known at the beginning of your project?” Since there were participants in the room who were indeed embarking on brand new CAF-supported projects, it was a moment for passing on knowledge. Many of those present acknowledged that this was meeting a need in the community. It was also a chance to have real conversation about the ethics, aesthetics, and logistics of community-engaged practice. 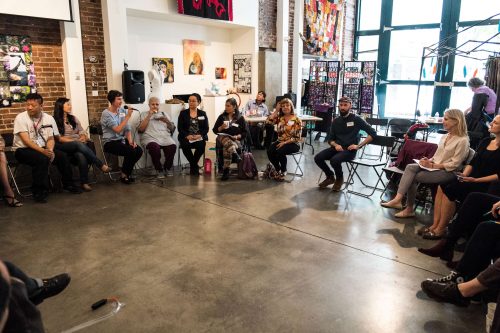 In summary: we talked about needing more time for the creation/relationship building process and building a longer timeline into project planning. We talked about the challenges of balancing multiple grants and priorities in a logistical and artistic patchwork, and the need for mentorship from those more experienced in the work. We discussed creating multiple paths of participation to allow individuals’ gifts to come forward, and building legacy planning into projects so that participants know it’s not a one-shot deal. We imagined sharing resources with each other more and competing for the same funding less, and how the principles of the sharing economy can inform us in this. We reiterated the desire for mentorship and “buddy systems” both for project leaders and project participants. We emphasized active listening over formulated replies. We rejected austerity and the war on the poor and affirmed the need to improve the status of artists. We said “Document” and “Be Dangerous!” We resolved to talk to grant program officers because they are real people. And we reminded each other that we already have what we need, because we are what we need – right here in our own community. 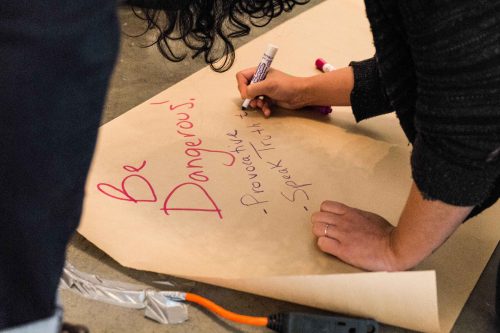 After the discussion, invited guest Phoenix Winter gave a witnessing reflection on what she’d heard. She reminded us that not being perfect – being rough around the edges – is part of what makes this work real and meaningful. The continually emerging learning process that comes out of the relationships we build is part of what makes this an exciting artistic practice. It takes courage to make that leap of faith as an artist working alongside community, and it requires that we continually engage with others doing similar work to renew our commitment to it.

As participants have told us since, the informal, inclusive frame set by the Unconference seemed to generate a different level of relaxation, leading to more productive and effective outcomes. Creating an alternative venue for sharing knowledge among community arts projects in the Downtown Eastside seemed to be an effective way of building relationships and, I hope, of developing our collective awareness of each other as a wonderfully diverse, yet cohesive, community of practice. 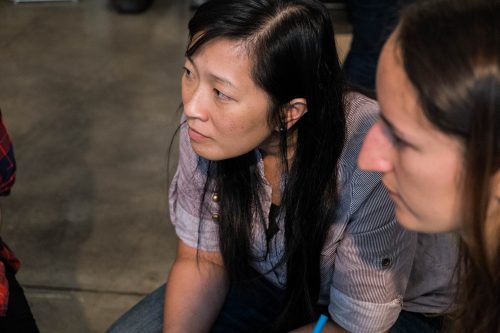 Community artists often work at intersections of culture, class, gender, and generation – as one participant put it, “catalyz(ing) the collective imagination” around important issues. Through down-to-earth creation and relationship-building, practitioners must grapple with central ethical questions of memory, identity, citizenship, and justice. At a moment when academic attention on community and social practice in the arts is higher than ever before, the grassroots leaders represented at the Unconference are on the ground, doing the work, using their intuition and their expertise to do all this and create fantastic art, besides. None of the projects are out looking for external validation. They are doing community arts not because it’s a politically fashionable idea, but because it genuinely meets a need within their context.

I believe that the more opportunities we create as community artists to articulate the intuitive things we know about the work, the more we contribute to shaping the field in a way that reflects our values and visions. This could represent a revitalized role for the CACV in providing just such opportunities for professional development, resource sharing, and mentorship, and in amplifying the voices of community artists in the Downtown Eastside and beyond. 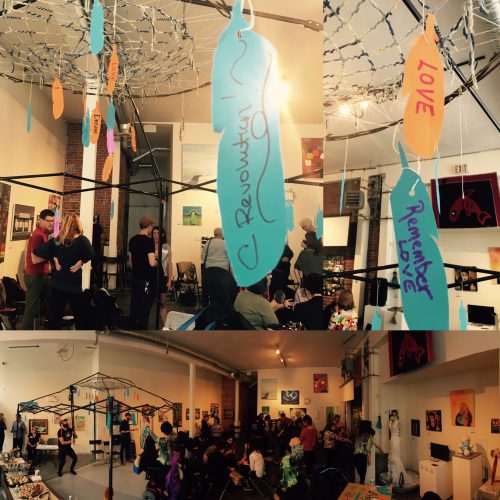 Many thanks to SFU’s Vancity Office of Community Engagement, the Hamber Foundation, and Community Arts Fund donors at SWITCH! for their generous contributions to making the Unconference a success!