President CACV 2013
Pierre (aka Dr. Legumes) joined the Community Arts Council of Vancouver’s board in November, 2011, as the Community Environmental Art board representative. Over the past eight years Pierre has been transitioning from a thirty-year career as an academic psychiatrist to that of an artist. Most of his works address biological, psychological, social/cultural, political and spiritual issues simultaneously. This has led him to use multi-sensoriality in many of his projects. Recent projects such as The Root Laboratory Project and Jardin Biologique #8 , Potager de Résistance put him in a collaborative dependency with living matter.

Since 2005, Pierre has had five solo shows, participated in 25 group shows in Canada and presented in three art conferences. He is a member of the Gallery Gachet artists collective. Below are a few of photographs of his projects. Find more details here. 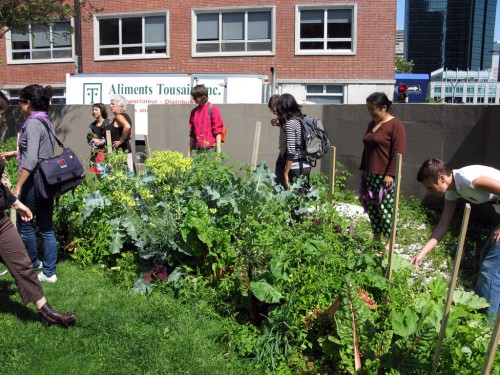 Cela fait plusieurs mois que je travaille avec les raciness de plantes. J’en fait des sculptures. Des racines nous en avons tous. Physiquement avec nos cheveux, psychologiquement avec nos familles, culturellement avec nos communautes et spirituellement notre  terre et le cosmos. En exposant les racines de cet arbre je vous rappelle l’importance de celles–ci. ///For several months I have been working with roots. We all have them:  physically, in our teeth and hairs, psychologically with our families, culturally with our communities and spiritually with the earth and the cosmos. In the context of a Land Art Show, I exposed some of the roots of an apple tree and took the leaves off it. I then covered the ground with nontoxic colored sand to represent the sky. I also put a ladder upside down along with inverted apples on the ground .The effect was to give the impression of an upside down tree. The roots became branches bearing apples while the branches were roots reaching into the sky. Apple trees carry may symbolic meanings from knowledge and strength to sin. Inverting may also lead the viewer to reevaluate their relative position in the universe.