On May 17, 2016, Mayor Gregor Robertson and Minister of the Environment and Climate Change Catherine McKenna unveiled a plaque to commemorate Gastown as a national historic site. CACV was invited to participate in the unveiling ceremony to honour its advocacy efforts to preserve Gastown in the 1960s & 70s.

Mayor Robertson retold the story, relayed to him by First Nations elders, about the great Vancouver fire of 1886 that devasted the Gastown area of that time. Seeing the flames, members of the Squamish and Tsleil-Waututh peoples travelled to Gastown by boat and saved many settlers fleeing the fire. They also helped to extinguish the blaze. This story has not been included in many of the official histories of Gastown, Mayor Robertson pointed out, which is why it is so important that it be retold at public events such as this plaque unveiling.

Here’s some background on CACV’s role in preserving Gastown and stopping the planned freeway that would have demolished much of its historic character, as told in The Arts and Our Town: The Community Arts Council of Vancouver 1946-96:

It was Hilda Symonds, a member of the Civic Arts Committee and the Executive Director of the City Planning Commission, who first rang the alarm bells. She was very concerned because all levels of government had approved a huge commercial development, including forty-five miles of freeway that would cut through Gastown, Chinatown and along the waterfront through Stanley Park to a new First Narrows bridge crossing. At a public meeting in December 1967, arranged by City Council to discuss the freeway issue, Arts Council member resigned as chairman of the City Planning Commission in protest against the the city’s freeway plans. The nearly 800 citizens at the meeting stood to applaud his views. Dr. Oberlander, an internationally known planner, declared, “Planning is too important to leave to the professionals.” By this time the Arts Council had managed to build a consensus among twenty-eight diverse local groups in opposition to freeway construction in the city. Moira Sweeney chaired the Civic Arts Committee and meetings were well attended and lively, with the freeway threat the urban issue.

Earlier that same year another Civic Arts Committee member, Evelyn McKechnie, who had been a social worker and was familiar with the Gastown area, the oldest and most historic site of the city, had become alarmed at the deterioration there. Encouraged by a major property owner, Gerald ‘Townsite’ Thompson, she set about saving the area from demolition. Evelyn McKechnie galvanized the Arts Council and everyone else, including pioneers, historians, residents of Strathcona and Chinatown, into supporting a campaign to retain historic Gastown and Chinatown. As a civic planner explained, “In the lengthy battle that followed, the various governments made a quantum leap in their thinking on heritage preservation.

Initially, Mayor Tom Campbell was furious with the Arts Council. The federal and provincial governments had pledged funding for freeways and the First Narrows crossing. “Council has tabled this for a month. We are criticized for making a snap decision. Then the people aren’t prepared to wait until we unsnap it. I only wish the Arts Council would support the City Council for a change,” said the Mayor. He was studying the implications of Prime Minister Pearson’s impending retirement and said he had “a lot more to do than receiving night wires from the Community Arts Council.” The Prime Minister’s resignation, he said, would affect decisions yet to be taken, including the proposed freeway, the Georgia Viaduct and First Narrows programs. A headline ran, ARTS COUNCIL CHARGE DRAWS CAMPBELL’S FIRE.

Evelyn McKechnie made the mayor change his mind. She resurrected the long-forgotten name “Gastown” and organized the famous walk around the area in September 1968, that would take place “rain or shine.” There was a downpour. Prominent architect Arthur Erickson gave an impassioned presentation preceding the walk. “Look up,” said he, “look up to see the integrity of these lovely old buildings.” Evelyn McKechnie had many well-trained guides and hundreds of citizens came to walk in the rain. Mayor Campbell also came and stated, “This is the most important thing that has happened since the Vancouver fire.”

The result was a dramatic halt in the extravagant commercial, freeway, and bridge plans. The Government of British Columbia in 1971 designated Gastown and Chinatown as historic areas.

Now Gastown is not only a provincial, but also a national historic site, one of 168 in Canada. 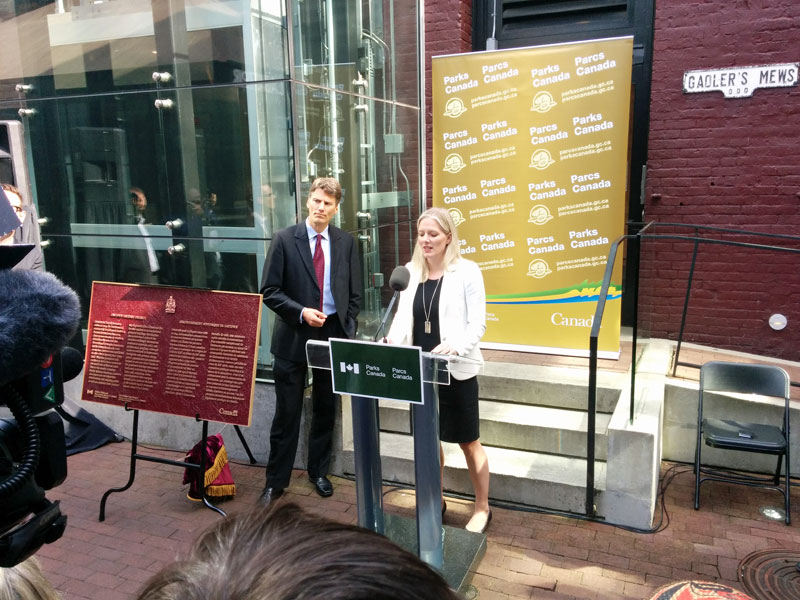