You are here: Home / Archives for News & Events / Dialogue 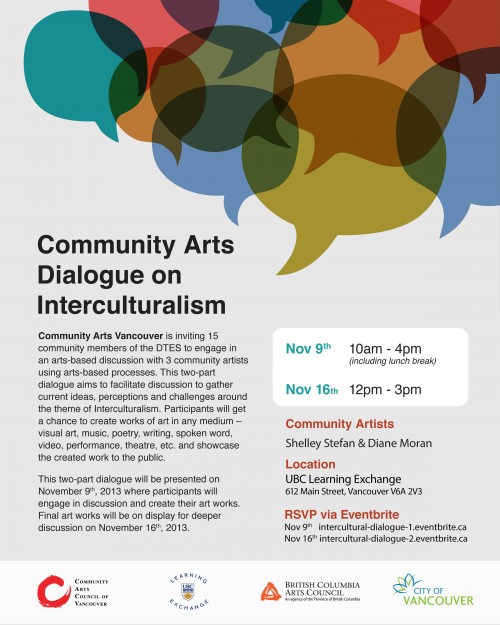 We’re so happy that our Dialogue was featured in the Source magazine. Join http://communityarts.ning.com for a discussion on what is intercultural!

Art helps define what it means to be

Art has many definitions, but it is fundamentally used as a means of communication, one that can even transcend cultural boundaries. The Community Arts Council of Vancouver (CACV) is a group that tries to connect people and create dialogue through arts-based community development projects.

“The process of engaging with people is as important as the artistic output,” says Mary Bennett, Program Consultant at CACV.

Through their dialogue series, one of the topics of discussion has been the role of community arts in promoting interculturalism.

Co-chair of the activities committee, Francis Heng, differentiates interculturalism from multiculturalism by analyzing the way that people in the community interact with each other.

“Multiculturalism, to me, means that people from different backgrounds and different cultures are given equal rights…but there’s no requirement for them to interact with each other. Interculturalism is where interaction becomes the missing link,” he says.

Despite having many culture-themed events around the city, such as the Latin American Film Festival and the Powell Street Festival, Bennett and Heng point out that there are not many arts-based events that focus on integrating different cultures.

Pangaea Arts, a local independent theatre company, tries to fill that void by producing performances with an interdisciplinary and intercultural approach. Since being incorporated in 1998, they have produced theatre performances that have combined Asian and Western theatrical traditions to create shows that are accessible to everyone, including non-English speaking audiences.

“A lot of people can’t work in the theatre in Canada because it’s so English-centric,” says Heidi Specht, founder of Pangaea Arts. “I [tried] to create dialogue and bring artists together and see what we can create together by combining our traditional art forms.”

In Cultural Metaphors, the first show the theatre troupe produced, musical and theatrical traditions from India, Ireland and China were combined in a cultural fusion that was performed in Gaelic, Sanskrit and Mandarin, with English as the unifying language. But the piece wasn’t language-centred so the audience could follow the story.

For interculturalism to happen, Heng says that people from different cultures have to interact at some point. Heng believes that art can transcend cultural boundaries, so that people of different backgrounds can come together. Even for people who don’t share a common language, working on a project together allows them to overcome the difficulties of trying to connect through words, and instead they can engage with their hands or bodies, says Heng.

In Pangaea Arts productions, language barriers between the actors are overcome through the use of translators. When it comes to multi-lingual performances, Specht says that audiences don’t necessarily have to speak the languages used in the play; instead, nuances and meanings are understood through actions and context.

Bennet suggests that we use the right brain when making art, which is the less rational side, where emotions can play a bigger part in our interactions with people. In contrast, the left brain rationalizes and forms critical questions that are used to try to understand a different culture, he says.

As part of their goal to promote community and intercultural understanding through art, CACV is helping to organize volunteers and artists to work on a snake sculpture for the upcoming Chinese New Year celebrations that will welcome in the Year of the Snake.

Heng believes that art is a language that everybody is born with but not always exposed to. For Heng, an artist is someone who sees the world differently and is able to use art as a language with which to communicate.

In order to have more integration between cultures in the arts, Specht believes that training institutions need to change what’s being taught because there’s not much diversity – students are still primarily being trained in the British theatre tradition.

In the future, both Bennett and Heng hope that they can bring more people together to work on art projects, have meaningful dialogues and engage communities. 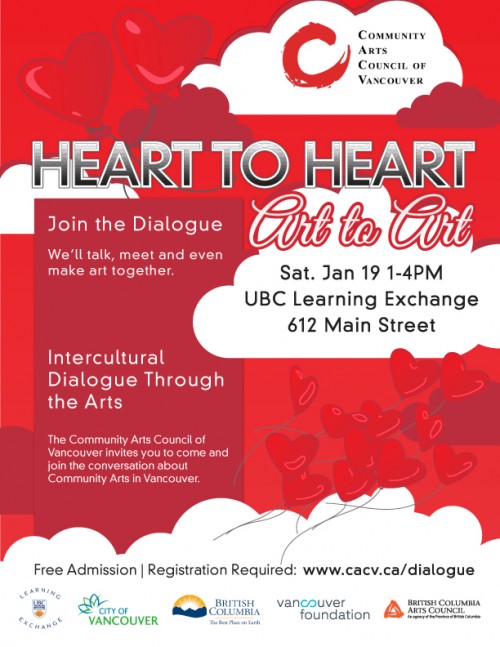 HEART to HEART and ART to ART

Intercultural Dialogue Through the Arts

The Community Arts Council of Vancouver invites you to come and join the conversation about community arts in Vancouver.  We’ll talk, meet, share and even make art together!

Hanna Cho, Curator of Engagement and Dialogue
Museum of Vancouver

One Artist recorder volunteer with each group – Amanda introduces

Thank you to presenters, facilitators and supporters/funders

BC Arts Council, Province of BC (Gaming), UBC Learning Exchange

Most of the session will be participative aimed at artists and supporters sharing their thoughts.

Thank you to UBC Learning Exchange for providing space and support for our community arts dialogues.

Thank you to BC Arts Council for operating assistance and to the Vancouver Foundation and the Province of British Columbia for funding for our Downtown Eastside Community Arts Program.

Our name in Chinese:
溫哥華社區藝術協會

Thanks to Alan Lau and Francis Heng!

Well, the mid-winter festivals have been celebrated; today is the first day of a new year.

‘The sun is the same in a relative way, but you’re older’ – Pink Floyd.

It is a good life when there is something to celebrate in the middle of winter, especially in these cold and dark climes where the daylight hours are so, so, so, short.  Feasting, partying (hopefully with some common sense), meeting and greeting friends, family – and total strangers.  Depending upon how much common sense has been used.  It’s all good.

How many people make New Year resolutions?  Perhaps, there are some bodies out there in cyberland who would share their resolutions with us.  In a light-hearted spirit of fun.  Mine is to lose weight.  When the breath is hard to take, the knees and ankles ache, and it is difficult to dance for any length of time, the dancing being the most important,  it is time to cut out the cakes, ice cream, pies, cookies, chocolates, marzipan – all  the comfort foods, loaded with carbohydrates and calories.  This way of eating is not artistic.

Cat among the pigeons.

Please, do comment on this blog.  Your New Year resolutions, whether lifestyle can be considered a work of art, or anything you want to express.  Maybe we can ‘dialogue’ a bit.  Let us know what you would like to know, discuss, in this blog.  Treat it as a forum.

I just had to go back and change all the lower case letters to capitals, where appropriate.   In my own writings, these take one click longer.  What do you think of that?  Of course, when applying for funding, grants, making proposals – I use standard grammatical practices.  The art of written language.  Both ways mean different things, to the writer, and the reader – and the purpose of the writing is most important.

So, if nobody makes their wishes known, I think it would be fairly beneficial to pick an art organization and feature it, a different organization, or group, every month.

Wishing each and every one of you a peaceful and abundant 2013. 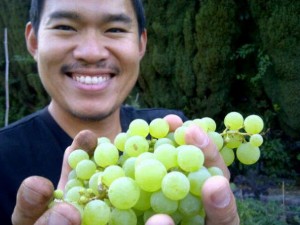 Francis Heng has been actively participating in various CACV initiatives since 2011 and is a passionate advocate for Community Arts and Social Change. In 2012, Francis became co-chair of our Community Arts Activities Committee and coordinator of Community Arts Dialogues.

Francis is a professional visual and performance artist as well as an arts-based facilitator. He currently works in a variety of printmaking mediums such as woodblock prints, linocuts and sintra carvings. Off the paper, Francis engages in the practise of Performance Art that speaks about current social issues that he is interested in. One of his previous work focused on the issue of immigration.

As a social activist, Francis is passionate about social change through dialogue and storytelling. He believes that the arts has the power to transcend language and cultural barriers, bringing people of different backgrounds and intentions together to form a bridge of understanding and acceptance. Francis does this through the practise of arts-based facilitation where he works with groups to explore opportunities for deeper dialogue through artistic means such as theatre, music, visual arts and storytelling. One of his latest projects is an 8-month long project where he and two other filmmakers are facilitating a group of seniors in North Vancouver to use Digital Storytelling techniques to share their stories to the world.